Hypnosis to Prepare for Succesful Operations

No one enjoys operations and it is perfectly natural and understandable that someone will feel some fear or at least apprehension at the thought of having an operation.

I know from my own experience how hypnosis can help with preparing for an operation. I was diagnosed with a brain tumour in 2001 and told that whilst it was not immediately life-threatening, if left in place it would probably kill me within 5-10 years. I would also continue to experience epileptic fits, need to have someone with me at all times and would not be allowed to drive. Alternatively, there was no guarantee of success from having the tumour removed and I could expect one of four outcomes:
1. Complete success without side-effects.
2. Speech damage.
3. Partial motor damage, even paralysis.
4. Death.

So not much of a choice. A very restricted short life with possible death looming or post-operative damage, even not surviving the operation. I still chose to have the operation.

On the morning of the operation, I was a bundle of nerves. My surgeon was very busy and had no time to reassure me. When I went down to theatre, my blood pressure was the highest it had ever been. I burst into tears because I seriously thought I would not survive.

Well I did survive but two days after the operation a sort of electrical reaction occurred in my brain leaving my speech slow and slurred and I suffered paralysis down my left side. I also had a mini-stroke five months later and shingles on my face. I did eventually recover fully but only after lots of physical therapy.

In October 2006 I had to have a new brain tumour removed from the same location but this time with a different surgeon who made time for me. On the morning of the operation, with a candula already inserted in my hand linked to a saline drip, I lay on my bed and took myself into self-hypnosis to ensure that I left for theatre in a calm and relaxed way. 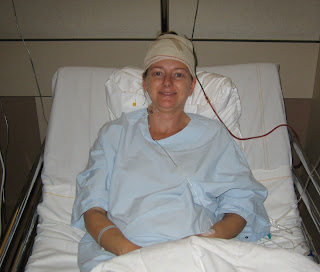 I had been told I would be in ICU for four days but stayed only two and my expected hospital stay of two weeks was cut to six days. This was because of my fast recovery. My convalescence period was also short and I suffered no side-effects. I credit my quick recovery to hypnosis and the power of my own unconscious mind which prepared me for a successful operation and fast recovery.

Another hypnotherapist told us about Stan who was visibly shaking as he talked about his forthcoming operation. He was due to have a hernia operation but was totally convinced that he would not come out of it alive. Under hypnotic regression, the hypnotherapist found that Stan’s fear went right back. “Well I know exactly what it was, and I’d completely forgotten about that incident,” he went on to explain, “I was at the dentist with my mother, she was having an extraction and she suddenly started screaming and screaming. I was terrified.” Stan laughed, “to think all these years that’s what’s been bothering me. I feel so good now, I know I’ll be fine.”

The hypnotherapist had Stan project his mind into the future and see himself recovering well after his operation. Stan rang the hypnotherapist a few days later. He’d enjoyed being in hospital and getting all the attention and the operation went smoothly. He felt he’d completely overcome his fear, in just one session of hypnotherapy.

Before surgery, hypnotherapy can be used to lead the person into a deep state of mind and body relaxation in which positive suggestions are given straight to the unconscious mind to relieve anxiety, reduce bleeding during the operation, eliminate post surgical discomfort and even reduce the level of anaesthetic required. Many operations are even conducted under hypnosis without anasthesia. Many women choose for natural childbirth using hypnosis to control the pain rather than an epidural or drugs.

Fear raises adrenaline levels which means that more chemicals are needed to overcome the natural "fight or flight" reaction of the body and produce the state of anesthesia.

Hypnotherapists often use "safe place" imagery, in which the client begins by imagining him/herself in a location that feels safe and secure. Once the "safe place" is established, the feelings of safety and security are anchored in – an NLP technique – and the client watches the whole process of the surgery repeatedly but in a detached way, a bit like watching a film whilst sitting in a cinema seat. The person then rehearses successful surgery and recovery with suggestions for comfort, rapid healing and a positive attitude.

Again positive imagery aids in the rapid healing process, shortening recovery time, reducing swelling, bleeding and with a positive reduction in post-operative pain. Ideally the person would have several sessions with the hypnotherapist to maximize the beneficial effects.

How does hypnosis help control pain after surgery? Have you ever been engrossed in a conversation and bumped into a chair, felt nothing but noticed a bruise later on? The preoccupied mind does not notice the pain. The nerves send pain signals but they never registered in consciousness and that is how the unconscious treats post surgical pain.

Personalized hypnotherapy sessions for your particular operation and circumstances are always best but if not possible, you can also download a hypnosis mp3 to prepare for surgery and a hypnosis “Prepare for Surgery” script is available for professional hypnotherapists.