Simon Cowell has been lighting up for 44 years and is doing all he can to quit smoking. 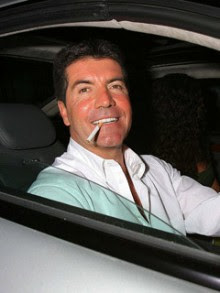 The X Factor boss's loved ones have begged him to cut down his 15-cigarettes-a-day habit because of his family's health history.

'His grandfather Robert was a heavy smoker who died of lung cancer,' a source tells People.

'His father suffered a heart attack.

'It made Simon think long and hard about his own health now.'

The 52-year-old has admitted that he started smoking at the age of 8 and just last year raved about how much he enjoys it.

But Simon has made a New Year resolution for 2012 and is now receiving treatment - including hypnosis - from a top London medical centre.