Hypnosis Helped Me Overcome My Fear of MRI Scans

I last had an MRI ten years ago simply because I suffered an extreme claustrophobic reaction and started shouting for the process to stop. Problem is, after two brain tumours and ongoing “electrical activity on the scar tissue”, I need an annual brain scan. CT scans offer far less detail but with substantially high radiation; the effective radiation dose of a CT scan is about the same as the average person receives background radiation in 3 to 5 years whilst MRI scans do not emit ionizing radiation. I have always said, “I might have had benign brain tumours but the radiation of CT scans could kill me.” 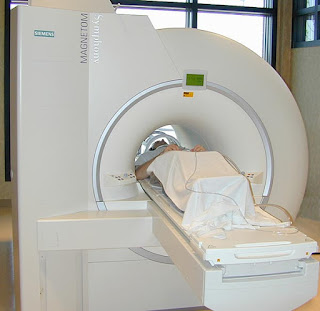 Both types of scanner look similar but the “tunnel” of a MRI scanner is narrower so closer to the body. My head has to be kept absolutely still in a cradle and I panic when I look out and only see the white wall of the tunnel in front of me. Yes I know, the answer is not to look but like all fears or phobias, we don’t behave rationally. A spider phobic will keep looking at a spider in the corner of the room rather than ignore it or a needle phobic will look while a blood test is being taken.

There are some coping mechanisms for MRI anxiety, called “Scanxiety” by someone I know.

A doctor may prescribe Xanax or Valium to be taken 30-40 minutes before the scan to calm the nerves. It may be a temporary solution but you will need someone to drive you back from the hospital.

If you prefer natural herbal remedies to drugs, you can try passionflower used by North American natives as a sedative or kava, a pepper native to the islands of the South Pacific. Just a moment…..pepper for claustrophobia? Kava also helps with menopausal symptoms, insomnia and to alleviate anxiety. Scullcap and Valerian help the body or mind release themselves from fear. St John’s Wort is said to balance the serotonin level and reduce anxiety but herbal remedies take time to build up so I am not sure how useful they are for a one-off scan.

Some doctors will prescribe a course of CBT (Cognitive Behavioural Therapy) to gradually expose you to the object of your fear which always seems very cruel and unnecessary to me plus the process takes weeks and there is a long waiting list.

I chose to listen to a hypnosis recording a couple of hours before my scan. I downloaded a hypnosis MP3 for Fear of MRI Scans and just lay back and relaxed. It took me into a tunnel of light where instead of feeling panic, I just felt calm and totally safe. I was enjoying the relaxation so much that there was no desire to open my eyes and trigger any claustrophobic feelings.

Later, at the scanning unit, I told the staff that I had been claustrophobic about MRI scans in the past so asked to look at the machine first and for them to give me a couple of moments to settle. They gave me a “panic button” to squeeze should I need to. They explained that the first part would take about 20 minutes then they would inject some dye into my bloodstream which gives contrast on the scans and continue scanning for another 10 minutes.

I knew in advance that I could bring a CD but rather than bring classical or relaxing music, I chose a favourite CD from Seal as I am very familiar with each song. Focusing on the words seemed to help.

MRI scans are very noisy with erratic sounds followed by periods of silence. There can be buzzing, knocking, clanging bells, drilling and one very loud part which reminded me of the noisy start to Pink Floyd’s track “Time” on “Dark Side of the Moon”! My CD did not drown out the noise but it helped distract me.

The hypnosis definitely helped me. I was able to calm my breathing, lie still for over 30 minutes of scanning, keep imagining myself in the tunnel of light and most importantly, not open my eyes! Having endured my first MRI scan in 10 years without anxiety, I know I have put scanxiety behind me thanks to hypnosis and I have the MP3 on my laptop to listen to before any future scans to ensure I am relaxed.

Posted by Antonia Harrison at 12:23