Can You Speak As Well As 10 Year old Dalton Sherman? 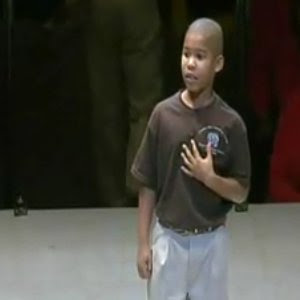 At 10, Dalton Sherman is a speech-making pro. Since winning a big oratory competition in Dallas, he has spoken at numerous churches and events all over Dallas. He was keynote speaker at an educational conference for 20,000 people on 25 August 2008.

“He has the ‘it’ factor,” said Dawn Blair, Dalton’s godmother. “Like Tiger has it, Obama. You can’t put your finger on it.”

Dalton’s speech was directed toward teachers. The applause motivated him, especially when he gestured and gave shout-outs to different neighborhoods, telling teachers to help children no matter where they’re from. “We need you,” he told them.

He was coached all summer focusing on proper diction and pronunciation of words. Ms. Redmond said she immediately recognized his big vocabulary when she began coaching him and he worked hard in response. Mrs. Sherman uses a worn book of her grandfather’s, “Natural Drills in Expression,” published in 1909, to coach her son on pronunciation.

Demonstrating, she reads a sentence. Dalton repeats it— “to dare, to do, to die.” He loves the book.

“I hope that I touch a lot of people,” Dalton added.

In June, he memorized the words. Then he practiced giving the speech up to three times a week at his family’s church, Concord Missionary Baptist. His mother and Ms. Redmond stood in the balcony as he practiced his movements and the built-in pauses to punctuate the text.

Dalton wants to be a news anchor someday, but he’s got even bigger plans. “Maybe after that, I’ll try to be president,” he says. “I want to be the next Obama.”

Full text of Dalton Sherman’s keynote speech “Do you Believe in Me?”


If a 10 year old boy can learn how to give a speech in such a way, you can also learn. A local chapter of Toastmasters International can help you develop public speaking techniques sharing feedback of what was good and points for improvement. Learn from others. Overcome your nerves in a safe environment, learning step by step. The Competent Communicator programme of ten speeches will guide you through different challenges while you speak on topics of your choice. Learn to think and speak on your feet with Table Topics – impromptu speeches of up to two minutes. Toastmasters is challenging but also fun and social. 85 years old, there are nearly 250,000 members in more than 12,500 clubs in 106 countries!