Have You Considered Gastric Band Hypnosis as the Safe and Easy Way to Shed Unwanted Weight?

It must really hurt when your 10-year old son calls you "FAT". Sometimes the pounds just pile on day-by-day as your clothes shrink in the washing machine but one day you have to face the truth. It's not your clothes, it's you.

One English Mum hadn't weighed herself in years and was shocked to find her weight had crept up to 15 stone 3 lbs (213 lbs or 96 kg).he It's not just that she was struggling to squeeze into a size 18 in clothes - when you can find clothes in that size - but carrying extra weight is a huge strain on the heart and other vital organs.

Her weight gain started with comfort eating of chocolate during exam periods at university. When she married, she started to serve up huge plates of pasta even though her husband asked her whether she should be eating so much. She made excuses not to take her children swimming, "I couldn't run after them and I daren't take them swimming,” she said. “I daren’t put on a costume. I felt horrible and had to cover up with a towel. I felt like crying whenever we went to the pool and I couldn’t get in. They'd ask if I was taking them swimming and I'd make up excuses and say their dad would take them as he was better at it."

It was her son's words which affected her like a "knife in her heart" and she decided to take action. "He said he liked it because I was cuddly, but I was stunned.” Rather than enrol in the gym and give up after a couple of weeks like most people, she heard about Gastric Band Hypnosis and wondered whether it would work for her. 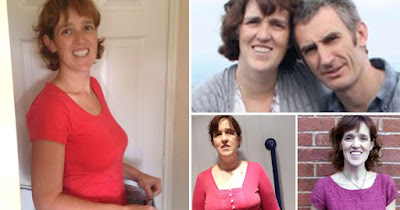 The mum lost five lbs in the first week and more than 5 stone (70 lbs or 31 kg) over 10 months. She slimmed down from dress size 18 to a 10. She says, “I love looking in the mirror now, putting on a dress and thinking 'wow;, which I never did before.”

Gastric Band Hypnosis is a safe,natural and relaxing way to re-program your mind and undo bad eating habits. It could work for you, regardless of your age, weight,BMI or the amount of weight you want to lose.

Antonia Harrison is based in Portsmouth (UK) and is the English Skype Hypnotist who offers Gastric Band Hypnosis over Skype anywhere in the world, in the comfort of your home.
Posted by Antonia Harrison at 17:00