Imagine being scared to leave your own home because of the way you look, fearing taunting and prejudice will bring on panic attacks.

Richard Savage is a chef who suffers from Moebius Syndrome, a rare neurological disorder which paralyses the facial muscles. It can cause respiratory problems, difficulty swallowing, sleep disorders, weak upper body strength, and, as in Mr Savage's case, problems with speech. 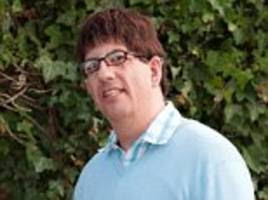 He has been taunted all his life and been the victim of prejudice, even being told once he was too "ugly" in a job interview.

Two years ago, he stopped going out of the house, developing panic attacks and Agoraphobia,the fear of open spaces. He said, 'I never left my house. It was terrible. I had to get a doctor's note and wasn't able to work. I have a genetic condition which means I can't move the muscles in my face. It affects my speech. I was never able to fit in with society and at school I was badly bullied. People said I was retarded and ugly. I felt worthless. I became very dejected and withdrew. In my mind, leaving the house was too risky because almost every time I went outside I suffered prejudice.'

Rather than give in to a lifetime of depression, Richard finally turned his life around after having home visits from a cognitive behavioural hypnotherapist. He said:

'A friend suggested I try and get help with my agoraphobia so I had one two-hour session. I was very sceptical but I drifted off naturally, like a good night's sleep. It was like I had gone through a fog and there were no more worries, no more anxiety and no panicking. It is almost like you peel away years of anxiety and that is a big, dramatic change.' He says leaving his house for the first time was 'amazing'. The hypnotherapist who treated him said he came out of the session 'bright eyed and bubbly like a different person'.

This is the power of hypnosis, working with your own subconscious mind to produce results, naturally and safely. Imagine what it could do for you.

Antonia Harrison helps people all over the world, in the comfort of their own home, through Skype Hypnosis. Download her free e-book "The 21 Myths & 30 Truths About Hypnosis" at http://www.EnglishSkypeHypnotist.com

Posted by Antonia Harrison at 10:46