Smokers in the UK are encouraged to stop smoking for 28 days in October 2013.  If you can stop for 28 days you are five times more likely to stop for good. 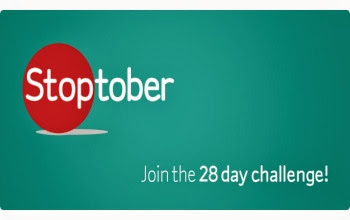 "During the Stoptober 2012 campaign, a staggering £25 million was saved by the 160,000 people from not buying cigarettes.
Chief Medical Officer Professor Dame Sally Davies said: “Half of all smokers die as a result of smoking, this is the single biggest cause of premature death taking more than 100,000 lives in the UK and costing the NHS up to £2.7bn each year.
It is estimated that you add an additional seven days of life for every 28 days you remain smokefree.
“We want every smoker to consider making a quit attempt this October and join the thousands of people who are feeling the benefits from stopping smoking last year.” (1)

That is the good news but stopping smoking by willpower alone is hard, very hard.  The extremely addictive drug of nicotine does not give up easily as anyone who has tried to go "cold turkey" will tell you.

Nicotine replacement products might help kick the habit but they keep you addicted to nicotine.  I know someone who has been chewing Nicorette chewing gum for 15 years and the gum has been linked to oral cancer.

I encourage you to stop smoking in October but do it the easy way with safe, natural and effective hypnosis.


“Hypnosis is the most effective way of giving up smoking, according to the largest ever scientific comparison of ways of breaking the habit. Willpower, it turns out, counts for very little”.  ~(New Scientist, Volume 136 issue 1845 31 Oct 1992, page 6)

The average smoker smokes a packet of 20 cigarettes per day at £7 so spends about £210 every month ...of net income.  Stop smoking with me and donate what you would have spent on smoking to a great charity.  I recommend Brainstrust which helps patients with brain tumours and their carers.

Stop smoking in one Session of Hypnosis with the English Skype Hypnotist .  Call today.  Sessions available in Portsmouth (UK) or worldwide via Skype
at http://www.englishskypehypnotist.com/stop-smoking-easily/

Posted by Antonia Harrison at 18:18